Luke’s writing work has been featured at the 2016 DC and LA WebFest. His pilot script for VC, was a Second Rounder at the venerable Austin Film Festival in 2016 and 2018. Other writing credits include the screenplay FLOTSAM & JETSAM.

Luke’s independent film work includes the title role in THE SPEAKER, as well as roles in JERMAINE, NO ONE KNOWS I’M GONE and LAST SCENE.

Brad Armacost has a long association with Irish theatre in Chicago, garnering multiple Jeff nominations for his work in THE WEIR, ARISTOCRATS and A MOON FOR THE MISBEGOTTEN. He received the Joseph Jefferson Award for the role of Teddy in Brian Friel?s FAITH HEALER at Steppenwolf Studio/TurnAround Theatre and the 2014 Joseph Jefferson Ensemble Award for SEAFARER.

Other Friel projects include WONDERFUL TENNESSEE, LOVERS and DANCING AT LUGHNASA. He appeared in Synge?s PLAYBOY OF THE WESTERN WORLD (Directed by Doug Hughes) and The SEAFARER with John Mahoney, also at Steppenwolf. Other credits include A TOUCH OF THE POET at the Goodman Theatre with Brian Dennehy, WAITING FOR GODOT with Remy Bumppo and at Northlight Theatre (again with Mr. Mahoney) in A LIFE. He has appeared numerous times at the Goodman Theatre and Chicago Shakespeare, including the Jeff Award winning Best Production of The MADNESS OF KING GEORGE III.

He is a Company Member at Provision Theatre, (where his performances in A CHRISTMAS CAROL, CS LEWIS, ONSTAGE and SHADOWLANDS have all been Jeff nominated) as well as an ensemble member of Irish Theatre, Chicago (formerly Seanachai Theatre Company) where he recently performed in Eugene O?Neill?s HUGHIE and Conor McPherson?s SHINING CITY.

He has appeared with the Chicago Symphony Orchestra in Strauss? Le Bourgeois Gentilhomme, as Pablo Neruda for Bedoya?s Caminos del Inka and The Tristan Effect and Igor Stravinsky?s The Rite of Spring for Beyond the Score with the CSO and the Memphis Symphony Orchestra. 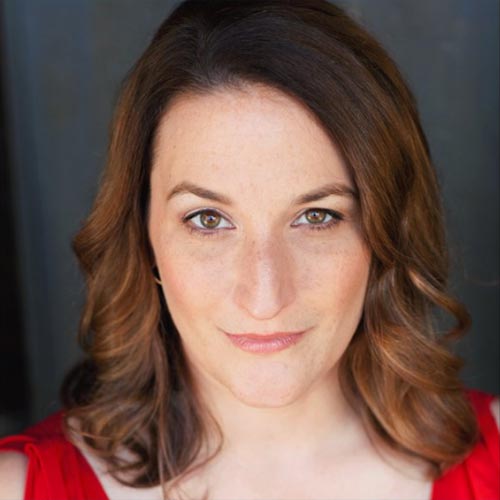 Genevieve is a crossover performer that lives in the Chicago area. Her most recent work includes soling at Carnegie Hall, Lincoln Center and Pritzker Pavilion with Chicago-based Fulcrum Point, performing the anthem at Taste of Chicago, performing live onstage in ?Motown Metal? with Fulcrum Point in Chicago?s Harris Theater and live opera performance with WFMT radio as part of Make Music Chicago.

Her voice has appeared in a TODAY show segment, onstage at TED Global in 2010 and on local news affiliates in Chicago and her recording work has included several commercials for Fiat, Loews and similar brands. Her acting experience includes work with Lookingglass Theater (North China Lover, 2013,) Fury Theater, James Downing Theater/Mayne Stage, Theater D, On the Spot Theater and many more.

Genevieve’s TV work includes features films like The View from Tall, web series work like VC, and commercials for Honda, Sittercity, Chia Lifeline and more. Genevieve has sung locally with American Chamber Opera, OperaModa, Redmoon, Elgin Opera, Chicago Chamber Opera, Fury Theater and Fulcrum Point. Genevieve’s singing experience includes the Rev. Mother in Nunsense, the repeat role of Lucy in The Telephone, Adele in Die Fledermaus, Constance in Dialogues of the Carmelites, Frasquita in Carmen, Dorine in Tartuffe, Lola in Gallantry, Beth in Little Women, Vera in A Month in the Country, and Sarah Good in The Crucible. She’s even begun writing plays and book/librettos for musicals!

Kurt has worked in the film/TV/theatre community most of his life. He has directed countless plays and worked as an acting teacher and coach. He has worked with, and assisted casting directors Jane Brody, Mali Finn, and Lynn Stalmaster. Kurt is also an actor and graduate of The Juilliard School who trained in Russia at The Moscow School of the Arts.

On camera, Kurt has appeared in such films as ?Public Enemies?, ?Road to Perdition?, ?The Express?, ?Witless Protection?, ?Henry: Portrait of a Serial Killer?, ?Dillinger?, ?Howard Beach: Making the Case for Murder?, and TV episodes of ?Chicago Fire?, ?Chicago PD?, ?The Chicago Code?, ?Detroit 1-8-7?, ?ER? and ?Prison Break?.

On stage, Kurt has performed at Steppenwolf Theatre, National Jewish Theatre, Chicago Shakespeare and A Red Orchid Theatre. Kurt is a current member of Buffalo Theatre Ensemble, a former artistic director of The Theatre of Western Springs and former co-owner and director of The Acting Studio Chicago. Kurt recently Co-directed the web series Humane Resources which can be found at www.humaneresources.tv

Erik is the owner of Acute Focus Productions (AFP), a trusted source in video production since 2007. Headquartered in the Chicagoland area, Erik’s professional team of skilled individuals has worked on audio and video projects for clients throughout the United States and abroad.